On Thursday night my girlfriend Danielle, who revels in spontaneity, decided to drive up and surprise me after I got out of work. Of course, I wanted to reciprocate and take her out on a nice dinner. At first I thought, what the heck, let’s just go to Chevy’s and keep it simple. Nooooo, not me…not Andy. I decide to take the 15 minute drive over to Hoboken and go out to a cool restaurant. So that’s what I did. 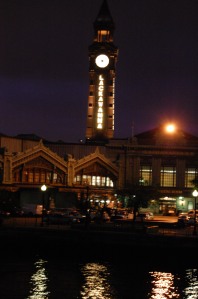 We drove over in 10 minutes, no problems. Then came the problems. Parking. I drove around the mile square for just about an hour before I found a parking spot 6 blocks away from where I wanted to be. Oh well…we’ll live. It was a nice night to walk.  I decided to go to Teak on the Hudson which is right off the famed Sinatra Drive waterfront. I had been there about three times before but I decided to go back for their half price nights where everything on the menu is…you guessed it…half price. For three drinks, an appetizer, and four sushi rolls, the bill came out to $48 (including gratuity). Not too shabby for a New York City-esque restaurant experience.

Only photo I got inside Teak

As far as the restaurant itself, it’s at Hudson Place which is perpendicular to the waterfront which offers some second-to-none views of NYC (the waterfront, not Teak). If I had to pick three words to describe Teak, they would be artsy, innovative and gutsy. The decor is pretty darn impressive. There is a GIANT exotic fish tank behind the bar chock-full of all types of Koi and other types of colorful, Nemo look-alikes. However, as awesome as the atmosphere is, it can be sort of conflicting. There is quite an amazing and awe-inspiring juxtaposition of styles here. The one side of the place has a Zen-Buddhist feel but when you look across the restaurant, it feels as though you’re stepping into a Gothic/Rennaissance mansion filled with lush tapestries, gilded furniture, Roman-esque statues and tons of dark, aged wood. Honestly, I love it…it’s like a blast from the past. And I embrace the sense of ‘disorder’ if you want to call it that. I don’t feel as though a restaurant has to have one all-encompassing theme.

As far as service goes, there’s nothing too spectacular here folks. Everytime I’ve gone, the tip gets automatically added onto your bill which equates to mediocre (at best) service. I just can’t put my finger on it but it seems as though almost every waiter/waitress I’ve had here is just….indifferent I guess. What I’m getting at is, don’t come here if you’re looking for outstanding hand n’ foot service because judging on four times that I’ve been here, you’re not going to get it.

Overall though, I would say Teak is ‘Good.’ I always say I will only go on half-price nights (call me cheap if you want) but I feel as though it would not be worth it to pay exorbitant prices for food that is good, but doesn’t necessarily differentiate itself from the competition which is key in my book coming from a public relations/marketing background. Food is good, drinks are good, atmosphere is awesome (on a night that isn’t too busy).

My verdict: Go to Teak on a Monday or Thursday (half price nights) and try it out. See if you like it. If you like it, go back on a Monday or Thursday. Pretty simple right? I will also add though, that if you’re into going to restaurants for the ‘experience’ or the ‘ambience,’ then this would be the place to go. If you go to restaurants to eat a quick, decent meal and then skidaddle, this place might not be for you.

Outdoor Seating: 1/10 (We tried sitting outside at first but they placed us at a table that couldn’t seat two infants comfortably, let alone two grown adults. Pretty ridiculous in my opinion. We then had to wait 20 minutes for an inside table which was right next to a bar full of annoying drunkards.)

Here are some other random photos I took while I was out on the town for those of you who have never been. It wasn’t a great photography night for me.

Skyline as viewed from Sinatra Drive